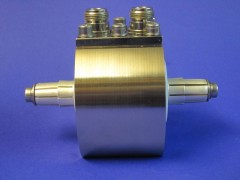 However, a directional coupler cannot only measure the amplitudes of forward and reverse wave but also the phase between those two. With this information one can calculate the complex impedance of the load, as it is used for example in Vectoriell Network Analyzers (VNAs).

Normally it is wanted, to transport the power of the amplifier to the load with reflections as low as possible. One can use the signals of the directional coupler to control a so called match box, which can transform a non-ideal impedance of the load to exactly 50 Ω as seen by the amplifier.

Another application of a directional coupler is (with a previously matched load), to use the signal of the forward wave for a regulation system to keep the forward power constant. By this one can guarantee more constant conditions for a physical, thermal or chemical process in the load. (Of course, another possibility is to regulate the voltage in the load directly, if this voltage is available).
The signal of the reverse wave, however, can be used to protect the whole system. If it reaches excessive values in amplitude, for example after a flush in an antenna or an arc in the line behind the coupler, the forward power can be down-regulated quickly or even shut off.

The spectrum of harmonics of the reverse wave changes normally with a big mismatch of the load as well.  Therefore higher harmonic levels, measured over a high-pass filter on the reverse coupling port of the directional coupler, can also be used as an input of a protection system.